You know how it works. You are good at what you do, so more people keep being ‘given’ to you to lead. Not only that, but you are relocated to corporate headquarters and most of the people you lead aren’t co-located with you anymore. You have more meetings than ever to attend, yet you genuinely care for the people you lead but don’t have anywhere near the time you used to to lead them.

What do you do?

This dynamic is very common for the people I coach. Flatter organisations means higher spans of control, which means more direct reports to lead. Below are three tips for leading a growing team that isn’t co-located.

Imagine if each of your direct reports knew exactly what they would have to do to be an A Grader and imagine if they had this clarity sooner rather than later. This clarity involves understanding two key responsibilities for their roles. 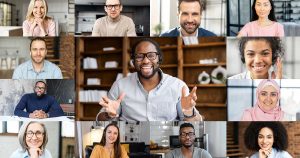 Firstly, what are the three to six Big Rocks they are responsible for achieving in their role? These will vary from person to person, but represent the answer to the question, “If you did nothing else, but achieved these outcomes that would demonstrate you have done a great job, what would those outcomes be?”

Please note that for some support staff, one of their Big Rocks is usually, “responding effectively and efficiently to ad-hoc requests on my time from staff who require my support.” This is the reality for some staff and ought to be recognised as a major responsibility for their role.

Secondly, clarify the relationships that need to be nurtured if they are to be successful in their role, and the behaviours that are required to nurture those relationships. Some people think that if they perform the outcomes part of their role then that means that they are an ‘A’ Grader. That isn’t true. The relationships part also matters.

If you have some staff that don’t agree with this, ask them if they will be in the room when the decision is made regarding a promotion. The answer, of course, is no, they won’t be in the room. This is why relationships matter. If you don’t work on them, they’ll hinder your career.

Conduct one on one meetings

Ideally these meetings should be in-person, but using technology is also fine. Aim for at least eight, one on one meetings per direct report per year. They don’t have to be in a ‘meeting room’ either – these are simple, regular conversations that could be conducted on the job. Ask the following questions:

“What, if anything, is stopping you from achieving your agreed performance objectives?”

“What, if anything, is stopping you from developing the key relationships we have identified for your role?”

“What development support do you need?”

“What do you require from me to help you be the best you can be for both yourself and the organisation?”

Adjust the goals when the goalposts move

We live in a time when it is rare that a staff member’s role will be exactly the same for a whole year. When their role changes, simply review their performance up until that point from both an outcomes and relationship perspectives, and then re-adjust the new Big Rocks and key relationships to be cultivated based on the ‘new’ role. Often these changes are subtle, but they matter.

As your team grows, role clarity is essential. Ensuring that each team member understands what A Grade performance in their role looks like and supporting them in achieving those outcomes will help you to lead an ever growing team.