For me a defining moment in the Australian Football Leagues (AFL) 2010 Grand Final Replay was the desperate lunge by Collingwood defender Heath Shaw to knock the ball from the hands of St Kilda Captain Nick Riewoldt as he was about to kick the Saints first goal. 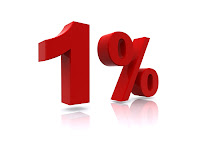 Coming from ten metres behind Riewoldt as he marked the ball, Shaw said, “I think little things like that maybe spur the team on. I was just happy to contribute to it.”

While very few of us get to reach to glory of becoming an elite sport champion crowned with being a member of the best team in the nation (or world, depending on the sport), we all have the capacity to done ‘one percenters’ whether at work, at home or in our relationships.

At work they can be as simple and saying a genuine, “Thank you” or “Please”, or remembering a colleagues birthday or partner’s and/or children’s names. They can be as simple as suggesting a team member leave early one day because of the extra effort they have been putting in over time. They could even involve cleaning up a meeting room and returning it to its pre-meeting state once your meeting is over.

At home they can be as simple as acknowledging and thanking whoever did the cooking, and then taking the time yourself to clean up. With friends it can be a quick phone call, text message or Facebook ‘Like’ or comment.

‘One percenters’ by nature aren’t hard. They simply take a level of awareness to recognise that they ‘can’ be done and all they take is a little effort.

How present are ‘one percenters’ in your life and what examples do you have of putting them into action?

PS For those who need to know, I am a member of the Western Bulldogs in the AFL