In 2004 actor Ewen McGregor and TV presenter Charlie Boorman created a tv series called Long Way Round, where they rode motorbikes from London to New York, covering more than 31,000 kilometres in the process.

Half-way through the trip, they were in Mongolia. Riding conditions had become extremely difficult and one of their support vehicles was involved in a serious crash where, thankfully, the crew only sustained minor injuries. They had a decision to make. Do we turn left and escape Mongolia for better roads in Russia, or do we proceed as planned? They literally faced a fork in the road and made a decision that would change Ewen McGregor’s life, forever. 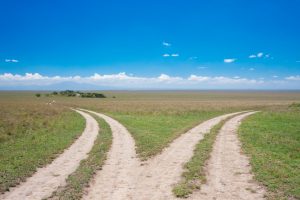 Speaking via satellite phone with David Alexanian, the producer of the series who was in a support vehicle, Ewen shared that he was struggling with the difficulty of riding through Mongolia due to the extremely poor state of the roads and tracks. Ewen and Charlie were days behind their schedule and were considering heading north to Russia where the roads were better and they could make up the time they had lost.

David suggested to Ewen that maybe the struggle was the real reason for the trip, and as such, why not embrace it? Who knows what rewards the struggle will bring?

Ewen and Charlie then discussed what they would do, and decided to follow their original plans and remain in Mongolia.

The next day after this decision, the roads improved. Riding became more comfortable. On the 46th day of the trip, they arrived in Ulaan Bataar and visited a Unicef shelter for homeless children. Part of the purpose of the trip was to raise awareness of the work that Unicef does throughout the world, so they regularly visited projects throughout their journey.

Ewen was especially affected by this shelter and a two-year-old girl, Jamyan who had been found wandering the streets two-weeks earlier.

Two years after meeting Jamyan at the shelter, Ewen adopted her. She is one of his four daughters.

Ewen has often reflected that if he had taken the road to the left, the easier path, instead of the road to the right, the more challenging path, he would have never met his daughter. When he made the decision to follow the path that better matched the purpose of the trip, he could not have known what lay ahead for him.

The beauty of these moments, and the struggles that lead us to them, is that they help to create clarity. When Ewen was asked to consider whether the struggles they had been facing were part of what the trip was all about, his decision became clear. “We must push on and do what we came to do.”

His clarity about what they should do moving forward was so clear, that he admonished himself for having even considered that there was an option to turn left and escape their challenges!

Please feel free to share this article with your network.