In 2004 actor Ewen McGregor and TV presenter Charlie Boorman created a tv series called Long Way Round, where they rode motorbikes from London to New York, covering more than 31,000 kilometres in the process.

Half-way through the trip, they were in Mongolia. Riding conditions had become extremely difficult and one of their support vehicles was involved in a serious crash where, thankfully, the crew only sustained minor injuries. They had a decision to make. Do we turn left and escape Mongolia for better roads in Russia, or do we proceed as planned? They literally faced a fork in the road and made a decision that would change Ewen McGregor’s life, forever.

END_OF_DOCUMENT_TOKEN_TO_BE_REPLACED

Creative Tension involves three simple concepts that, when put together, create a structure that provides the energy for effective action. Many of you will have seen me refer to the ‘elastic band’ metaphor (see TEDx Talks – Creating a Plan For Personal Success) that enables us to create the life we desire. 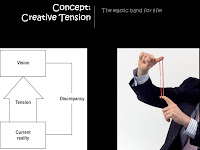 You see, Creative Tension is about creating what we want. Problem Solving, on the other hand, largely focuses on what we don’t want.

Artists
Imagine that Pink has decided to write a new album. What approach do you think would provide Pink with the biggest probability of creating an album full of smash hits.

a) To take the approach that at the start of the writing process that she has a problem to resolve. The problem is, “I don’t have any new songs ready to put on my album.”

To resolve this problem Pink may recruit a bunch of her musician friends and brain-storm a heap of ideas that they believe would be likely to eventually generate the ‘right’ songs for her album. As each song is recorded Pink’s problem would reduce because she would now have some songs for her album. Finally Pink would finish her album and release it to the public.

b) To take that approach that an album is a work of art and that the art requires some form of inspiration. Focusing on the quality of the album that she wishes to create, Pink would generate a number of experiences to enable her to fully picture what the album will be like.

Once the ‘direction’ of her album is clear, Pink would then recruit artists to help her to bring her ‘picture of success’ into reality. The number of songs on the album and the length of the songs would all fit into Pink’s vision of what the album was going to look like. Eventually, Pink would ‘create’ the album that she desires.

Music, art and films are all treated as creations to be made rather than problems to be solved. Alfred Hitchcock is famously reported to have refused to let his writers ‘close out’ a story line too early. Instead, Hitchcock would prefer to ‘hold the tension’ of an unfinished storyline so that true creativity amongst he and his writers could be inspired. The result; Hitchcock became one of the greatest film directors of all time and is still known today for creating stunning plots, scenes and movies.

Really, this list could go on and on, but I think you ‘get’ the picture.

Business people use the same approach to these problems as described in ‘a’ above for the artists. They gather a group of colleagues, brainstorm a bunch of ideas to resolve the problem, select the ‘best’ answer and then implement that answer in the hope that the problem is resolved.

Usually the ‘best answer’ does have an impact on the problem and it does reduce in its intensity. As this occurs and the original problem is less of a problem, less effort is put into resolving the problem. Why? Because now other, more serious problems require focus. And so the process goes, on and on and on. A bit like a dog chasing its tail!

What if, on the other hand, business people learnt to focus on what they are really trying to create? Rather than focusing on problems that need to be resolved, what if business people focused on the customer experience, the employee experience, the community experience of their service or product? And what if this focus was present at all levels of the organisation?

There is a difference between art and business
Art is generally not released to the public until it is created. In many ways art is created in a vacuum. Once created it is then released. Business is different. Much of what goes on in a business can’t be placed into a vacuum until it is created. The way the world works simply won’t allow it. In business we ‘change the wheels on the bus while the bus is driving down the road’.

Creativity is challenging because of the tension that is generated when we become clear of what we want, but have no idea of how to bring what we want into reality. Artists experience this tension all the time and have learned to embrace it. Business people on the other hand are scared out of their minds when they don’t know ‘how’ to bring the future they desire into reality. This is why most business people focus on Problem Solving rather than Creative Tension. Problem Solving is simply more comfortable. “We know ‘how’ to problem solve. We don’t know ‘how’ to create.”

If you are not sure of what I mean you might like to view the video The Gates (below). As you watch the short video, consider the power of Creative Tension that went in to bringing the vision of art on such a large scale into reality.

How present is Creative Tension in your organisation? What are your examples?

Gary Ryan is a founding Director of Organisations That Matter and can be most easily contacted at Gary.Ryan@orgsthatmatter.com .

I would like to recognise Robert Fritz whose writing over the past two decades has inspired my thinking and practice on this topic.