Anna is a confident senior leader with seven people reporting to her, and Jo, one of her direct reports, is a trusted colleague.

Last week, Jo asked Anna if they could have a chat about something “sensitive”. Anna agreed.

Here is their dialogue from the start of their meeting.

Anna: What sensitive issue would you like to discuss with me?

Jo: It’s about Jason. He has asked if I can share some feedback with you on his behalf, but he doesn’t feel comfortable telling you.

Anna: Why doesn’t Jason feel comfortable telling me whatever he wants you to say to me? As you know, I have an open-door policy, and anyone can give me feedback. I always tell everyone they can say to me whatever they like, and I will listen. I thought I had a good relationship with Jason, which is disappointing news. And he has been part of our team for nearly a year now. I can’t believe he can’t tell me what is wrong. What is it that he wants you to say to me?

Have you ever been in Anna, Jo or Jason’s position? All three are tricky, aren’t they? 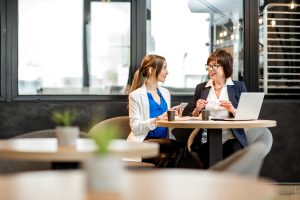 There is any number of reasons why Jason may be reluctant to provide direct feedback to Anna, including:

What do you notice about Anna’s immediate reaction?

An essential element of this fictional story (based on many real-life examples from 15 years of coaching clients) is that the person speaking with Anna is Jo, a trusted colleague. While Jo reports to Anna, their relationship characterises high Truth to Power. They have worked together for more than five years, and Anna knows Jo can be trusted to share honest and critical information for the team’s success. In an ideal world, all of Anna’s seven direct reports would have a similar relationship. But we don’t live in a perfect world. We live in a complex, fuzzy, imperfect world.

Human relationships can’t be forced. Anna’s instant response is to be upset that Jason hasn’t come to her directly with his feedback, and Anna sees it as a negative reflection of their relationship. For whatever reason, Jason isn’t comfortable telling Anna about his concerns. Before hearing the feedback from Jo, Anna’s primary concern shifts to focusing on why Jason isn’t telling her. While ideal, some people may never tell you their honest feedback. Instead, they will use anonymous surveys and sometimes (if you are lucky) a trusted third person to tell you.

Of course, Jo was skillful enough to encourage Jason to provide his feedback directly to Anna, including being there to support him if he was prepared to give that a go. It became clear that Jason wasn’t ready to be in the room with Anna when the feedback was delivered, not yet, anyway. Jo left the door open to assist Jason in the future should he give feedback directly to Anna. She also made it clear that in providing feedback on his behalf on this occasion, it wasn’t a guarantee it would continue to happen.

If you are Anna, how do you handle this scene?

First, you must value feedback in any form.

Feedback is a gift (please read my article here). As such, no matter the feedback, you say, “Thank you.” The same message applies to second-hand feedback from a trusted source. The trusted source, in this example, is Jo. You trust that Jo wouldn’t come to you with trivial feedback, and you also trust that Jo would have encouraged Jason to tell you himself. Jo is here and prepared to share this feedback with you, which means that it is a feedback “gift” that is likely both for you and about you. In other words, it doesn’t matter how Jason’s feedback gets to you. What matters is that it gets to you!

Understanding this critical lesson lets you focus on the feedback rather than getting distracted by how it got to you.

Second, you must value high Truth to Power. This is where people lower in the hierarchy can give their truth to people more senior in the hierarchy without fear of negative repercussions. Some people find it easy to provide Truth to Power. But not many. Because of how our brains are wired, most people keep their truth to themselves to protect themselves from the perceived negative consequences of being truthful.

Creating a culture that exhibits high Truth to Power requires effort and focus from leaders. And it requires knowing how to react when you receive second-hand feedback from a trusted source.

First, thank the person for bringing your attention to the feedback. Then, you listen from the perspective of understanding what you are being told. You do not have to agree with the messages, but you do have to understand them.

If you are Jo in this example, you must have permission to share clear, explicit illustrations of the behaviour that is the focus of the feedback. Otherwise, it won’t be useful sharing the feedback.

No doubt you are interested in Jason’s feedback! He was concerned that Anna “never listened to him.” (this is far more common than you may realise). In the conversation with Jo, several examples over six months were identified. Some of Jason’s reluctance to speak with Anna was due to his belief that she wouldn’t listen when he provided it to her, and he didn’t feel there was a genuine opportunity to speak up when they had their occasional one-on-one meetings. The cancellation of several one-on-one meetings significantly contributed to Jason’s concerns and signalled that he wasn’t as important as Anna espoused in team meetings.

While Anna didn’t agree with all the specific examples Jo provided her, she understood and recognised that the critical issue in this example was that she had allowed her genuinely busy schedule and her belief that everyone in the team was doing well to de-prioritise their one-on-one meetings. While this feedback was coming from Jason, it was possible, if not likely, that other team members may have been feeling the same way.

When Anna and Jason next met, she immediately thanked him for his feedback. Anna acknowledged why Jason felt the way he did and promised to prioritise their meetings moving forward. Anna also shared an insight about her cultural background and personality preferences that may have contributed to Jason’s experiences. Anna’s insights and vulnerability helped Jason better understand her and how she “ticks”. Finally, Anna acknowledged that Jason might never be able to tell her this type of feedback directly but shared that it was her preference to receive it first-hand, if and when that was possible for Jason. In the interim, receiving feedback through Jo remained an option.

How have you managed this type of feedback? What has worked for you?

Please feel free to share this article with your network.